The bunker was officially sealed up in April 1993 once the Bundeswehr no longer needed it. Before it was sealed, hazardous materials were removed as were several items of equipment, in particular office fittings such as tables, cupboards, office equipment, etc. While the technical equipment in the bunker can no longer actually operate, it is, to a great extent, still there.

In the middle of 2002, the bunker was opened up illegally after almost 10 years by means of a hole being made in the concrete seal which had been cast in the access tunnel (Fig. right: Hole in the concrete seal). During the next 18 months, the bunker was repeatedly re-sealed and just as often re-opened. Unfortunately, vandals and scrap metal thieves also got to know about the bunker. As a result the theft of various metals, especially the copper from the numerous large cables) led to the final demise of the equipment remaining in the bunker. In addition, parts were removed from countless machines – presumably for their spare-parts value – which the made it impossible to ever restore the affected equipment. The bunker was facing its final days. However at the end of 2003 two organisations, the Berlin Bunker Network (BBN) and the Berlin Forest Authority, in a joint action sealed up the access to the tunnel as well as the original site of the concrete seal. 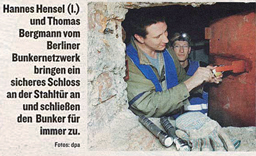 By the end of 2004, illegal entry to the bunker had been forced yet again. It was obvious that preservation of the bunker and relevant health and safety regulations could not be maintained using normal methods. BBN developed a concept at the beginning of 2005 to secure the bunker properly. Access holes were sealed yet again and an additional security door was added (Fig. left. Source: dpa, Berliner Kurier). This made it possible to obtain rapid access in an emergency and also allowed the police to get in following a break-in. Further security measures were developed and put into practice. Since then, the number of break-ins has dropped dramatically and practically anyone trying to break in was caught in the act by the police.

Since these security measures came into force, it has been possible to maintain the current state of the bunker and, in some cases, to eradicate some acute hazards which had arisen. Despite the current positive situation, the need remained to re-establish the original sealed state of the bunker. The immense personnel requirements necessary to secure the bunker could not be provided for ever, and break-ins still took place occasionally, some of which could not be detected in time to prosecute those involved. Fortunately, very little was damaged.